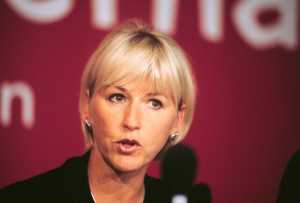 Professor and Associate Dean Milena Sterio has published a blog post on Intlawgrrls, discussing the Wallstrom Affair.  Margot Wallstrom is the Swedish Foreign Minister who openly criticized Saudi Arabia for its human (and women’s) rights abuses – particularly, for the Saudi regime’s decision to punish blogger and human rights activist, Raif Badawi, to a ten-year prison sentence and 1,000 lashes, and for the regime’s overall denial of the protection of women’s rights (as many know already, women in Saudi Arabia are not allowed to travel or drive without a male guardian, and Saudi girls can be forced into child marriages).  The backlash against Wallstrom has been swift, by both Saudi Arabia and other, mostly Muslim and/or Arab states, as well as by others in the Swedish business community and government.  Professor Sterio’s post discusses the western media’s lack of coverage of the Wallstrom Affair and concludes that human (and women’s) rights appear to always lose out to other geo-political and business interests.