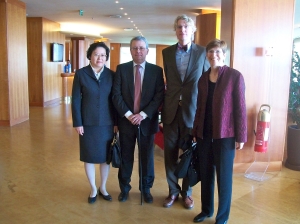 C|M|LAW Associate Professor and Associate Dean Mark J. Sundahl served as the co-coordinator of the 55th Annual Colloquium on the Law of Outer Space earlier this month in Naples, Italy.  This Colloquium involves leading experts in the field of space law who delivered more than 60 papers in five sessions.  The topics included the commercial use of outer space, the application of public international law to space activities, and the use in court of evidence derived from satellite systems.   Sundahl presented a paper at the Colloquium on the intersection of existing space law with the provision of the newly adopted Space Assets Protocol to the Cape Town Convention which governs asset-backed finance of satellites and other space assets.The Colloquium also hosts the World Finals of the Manfred Lachs Space Law Moot Court Competition which is judged by three sitting judges of the International Court of Justice.  Dean Sundahl is pictured here with the three members of the International Court of Justice who attended the Colloquium: Judge Xue Hanqing (China), Judge Leonid Skotnikov (Russian Federation), and, to the left of Dean Sundahl, Judge Joan E. Donoghue (United States).

1 Response to Sundahl Coordinates 55th Annual Colloquium on the Law of Outer Space in Naples, Italy